Last November, in the waiting room at a physical therapy appointment, I overheard a retiree in his mid- to late 70s disclose that he and his wife had just seen The Old Man and the Gun, marketed as Robert Redford’s “final” movie. So far, so good. But then he confessed that they had driven 90 miles to see it.  “We just missed it at the local mall, but we didn’t let that stop us,” he remarked.  “So we looked for its nearest showing. That was in Newton—on the other side of the state.” After the movie, which he described as “worthwhile,” the couple promptly drove another 90 miles back to Amherst.

What’s a retiree to do with all that time on his hands?  Whatever he pleases, I thought. But then it occurred to me: Time may be scarcer than he thinks, given his own march toward mortality’s finish line, not to mention the ebbing of “quality” years that might remain. And how have his brushes with free time before retirement prepared him for its aftermath? Vacations can be restorative and magical, but also an ephemeral tease. And childhood’s subjective sense of timelessness calls for innocence, not experience.

For another take on the Amherst-to-Newton hegira, I emailed Charlie Schewe, a professor at UMass Amherst who studies marketing to generations and cohorts, including seniors. Here’s his response:

The answer is maybe yes and maybe no. One of the keys to successful aging is to have some accomplishments each day…maybe just painting a picture or gardening.  But I know people who simply look out the window for entertainment.  They never cultivated a passion, a hobby, an excitement beyond their jobs.  That’s a big mistake. My latest research centers on Subjective Age, the age you think you are.  The more we believe ourselves to be younger [most think of themselves as 13 on average years younger], the more we can add years [7 on average] to our mortality.

So who am I to question Robert Redford fantasies?

Musings of the Heart 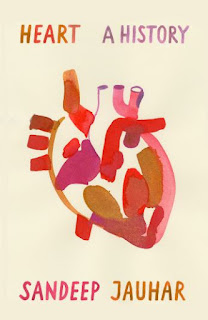 I’m far from the perfect husband. Exhibit #1: In a cardiac emergency, my wife—with twenty years’ experience as an educator in life-saving techniques—might well save me (should she choose).  With our roles reversed, she’d likely be out of luck. That was the substance of our recent conversation over lunch at Atkins Farms Country Market in Amherst. Atkins is next door to the upscale Applewood of Amherst Retirement Community. In other words, the store and its café have more than their share of patrons over 70. “You know," my wife confessed, “in 20 years, I’ve never had to save a life.” My response: “Just keep on having lunches at Atkins.”

To make amends, I recently bought my designated lifesaver Sandeep Jauhar’s 2018 book, Heart: A History (Farrar, Straus and Giroux ).  Gracefully and urgently written, its author, an American cardiologist, surveys the last hundred years of game-changing technologies and treatments in his field. Part science narrative, part memoir, and part public health tract, Heart explores the development and impact of foundational innovations like electrocardiography, catheterization, and human-to-human cross-circulation. It notes path-breaking epidemiological initiatives like the Framingham Study, which shifted sensibilities toward prevention. And it chronicles the development and roles of angioplasty, defibrillators, pacemakers, and transplants of hearts and arteries--real and artificial.

No less healer than technologist, the author gives ample emphasis to lifestyle factors including diet, stress, and exercise. And he reveals profound empathy for all patients. “Innovation and expertise are earned on patients and unfortunately there is always a learning curve,” he confesses. Compared with some agonizing, extended patient journeys, a decisive terminal attack can prove a worthy alternative, he observes. “Yes,” he affirms, “the heart can snuff out your life, but when the pressure of existence builds up, this organ—prime mover and citadel—is also a safety valve that can facilitate a quick and humane end.” 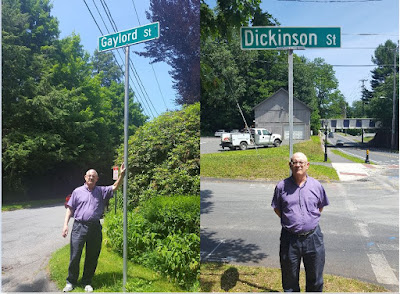 What is Amherst, Massachusetts’ most purloined street sign? Ten years ago, it was Gaylord Street—you decide why.  It’s a diminutive road on the Amherst College side of town with mostly rentals to students and townies.  Since then, I’ve passed by the street over the years—sometimes it’s sported the Gaylord sign, other times an unconsummated pole.

Kudos to the town for a savvy, low-tech solution. Several years ago, Amherst replaced the standard 7-foot sign pole, with a phi slamma jamma 12’ model.  It’s been a slam dunk for the town. No way, for example, that your blogger, in the accompanying photos, could comfortably negotiate the longer pole. Not, of course, that he would try.

My discovery brings to mind an earlier brush with signage. In the 1980s, I lived on the corner of two streets in Amherst.  One evening, from our living room window, I observed an intruder jiggling the   the side street's sign. Quitting my easy chair, I confronted him—advising that he visit some other venue. Noticeably stoned, he offered this brotherly insight: “It’s High Street, man; it's High Street.” After he retreated, signless, I reported that he was just an amiable hippie. “A harmless hippie with a magnum wrench, you mean,” my partner retorted. My response to her: “He had a wrench?”

A photo of the High Street sign was supposed to go here.
Alas, no sign to photograph, only a pole.
Posted by Wig & Pen at 4:19 PM No comments: