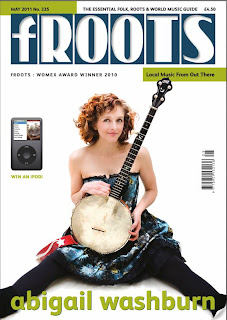 Z5NHQSJTD424
My fellow Americans, you just might have missed it: banjo virtuoso Abigail Washburn has become a roots/world music rock star on the British music scene. With added persuasion from her outstanding touring band, her latest album, City of Refuge, released in January of 2011, was a top-ten critics pick of the year in fROOTS and Songlines, Britain’s leading roots/world music magazines. In May of 2011, Washburn graced the cover of fROOTS and last week she was one of four finalists in Songlines’ artist of the year award.
In the U.S., Refuge has gotten strong reviews but less than the UK’s royal treatment. It wasn’t among the Times annual picks or on the many best-of annual lists on NPR’s audacious music web site. It did turn up as number 27 in the No Depression community’s top releases of the year.

Why the Anglo-American disconnect? Do Brits and other Europeans, given their location and enduring cultural connections with their former colonies, embrace a broader palette of multicultural musical influences? Abigail Washburn’s current work certainly fits that eclectic bill. It’s an uncommon hybrid of indie pop, Chinese and other East Asian influences (Washburn has lived in China and speaks Mandarin), and of course, American roots music.


There are many moving parts in this broader discussion: Does the United States still embrace vestiges of musical and cultural isolationism? Our internal cultural diversity, of course, is second to none. (although we do melt much of it down via American pop music)  Do our exceptional domestic musical assets distract us from overseas influences?
Some of our top artists, of course—Ry Cooder, YoYo Ma, and Washburn’s husband, Bela Fleck--have been passionate in creating hybrid music that reaches beyond our shores. And college campuses and other venues periodically host leading lights on the international scene. Still, when did you last  listen to Eleftheria Arvanitaki, Titi Robin, Kala Ramnath, or Bassekou Kouyate? --all world music artists of the highest order.

When I spoke with Washburn’s symbiotic musical collaborator Kai Welch  after an October 2010 concert by the band at the Iron Horse Music Hall in Northampton, Massachusetts, he agreed that the group's music would have been impossible two generations ago. How the world has contracted!  Back then, (my own salad years in the late 1960s), America’s idea of world music (the term, of course, hadn’t been coined) entailed Latin Jazz, jazz meets bossa nova, Olatunji, Makeba and Masakela, and, of course, George Harrison sitar riffs.

Through his songwriting and indie sensibilities, Welch—a gifted vocalist and multi-instrumentalist--has nudged Washburn toward greater emotional resonance.  (Her previous cd, the Sparrow Quartet, with a violin, cello, and two banjos, was no less multicultural, but many considered it too cerebral.)
Like  Sparrow, Refuge offers beautifully nuanced arrangements and ensemble playing, but it’s far more grounded, more emotionally immediate. And when you hear the group live (as in the clip below), you’ll appreciate its improvisational prowess as well. That clip is from a video accompaniment to Bob Boilin’s show on NPR. Prepare for musicianship that is disciplined yet adventurous in support of genre-transcending music. So forgive me for the earlier label of world music rock star!

Lou, thanks again, as always, for bringing excellent music and musicians to my radar. This is really interesting and good stuff.

Thanks again, and always, for bringing excellent music and musicians into my radar. This is lovely stuff.