What did pioneering social scientist Stanley Milgram and comedian Redd Foxx have in common?

Both cried wolf at least once too often.

In 1962/63, Milgram gained national notoriety for laboratory experiments that conned subjects into believing that they were administering electric shocks to other subjects to facilitate their learning. (The subjects on the receiving end of the juice were imposters; the shock machine only appeared to shock.) When the true subject, i.e., the shocker, had second thoughts about administering increasing voltage, a confederate of Milgram’s—an authority figure in a lab coat—would urge the shocker to continue. The experiments served up the shocking conclusion that Americans were excessively obedient in the company of an authority figure.

Milgram paid a price for the downside of his fame and his methods—Some colleagues and students were never quite sure when and if he might be putting them on.

Which brings us to a tale of disbelief at Harvard University on November 22, 1963. Here it is, according to Thomas Blass’ terrific book about Milgram, The Man Who Shocked the World:

So when . . . [Milgram] burst into Emerson Hall in the midst of a lecture by Talcott Parsons about the nature of the social system, and rushed to the podium yelling, I have horrible news. President Kennedy has been shot in Dallas,” he was met with outrage and skepticism. Barry Wellman, now a sociologist at the University of Tornoto remembers blurting out: You’re just doing another experiment on us.

And what about Redd Foxx ? Scarcely an episode of the 1970s TV series Sanford and Son went by without his character, Fred Sanford, clutching his chest and crowing to his long-suffering son, Lamont, “Oh! It’s the big one; Elizabeth [Fred’s deceased wife], I’m coming to join you, honey!”

Years later (1991), when Mr. Foxx collapsed at a rehearsal on the set of his new CBS television series, The Royal Family, his costar, Della Reese, and much of the cast at first suspected that he was treating them to his signature routine. But they soon realized the truth: Mr. Foxx was down for the count at age 68. 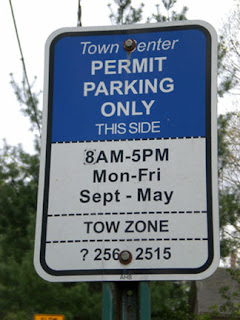 It’s 9 p.m. on Sunday night. You’ve finished the Sunday Times crossword and double acrostic. Time for one more puzzle: When can you park on Amherst, Massachusetts streets with the above-pictured sign?

If you’re wavering, that’s just what the good people in Amherst town government who cooked up the signs, hoped you’d do. The signs are in residential neighborhoods just beyond the legions of parking meters in downtown Amherst. The signage police want you to be uncertain so that you’ll exorcise all doubts by moving your vehicle to those meters. (Amherst residents, of course, know the solution to our puzzler, so they won’t need to hedge like you.)

At the meters you’ll pay a quarter for 35 minutes of peace of mind. (If you’re willing to pay for it, you may buy up to two hours of grace at your meter.) Perhaps the town will get luckier and sock you with a $10 ticket for overstaying your welcome. Parking revenues, of course, are a necessary evil among today’s cash-strapped municipalities. But here’s an alternative moral to our cautionary tale: Signage Can Intentionally Deceive as Well as Edify!

And the solution to our puzzler: If you don’t have a residential parking permit (and you don’t!), you can park on Amherst streets with those Mensa-teasing signs from September 1 – May 31 on Mondays through Fridays from 5 p.m. to 8 a.m. On the weekends, you can park there around the clock. From June 1 through August 31, park whenever you please.
Posted by Wig & Pen at 9:35 PM No comments: Links to this post 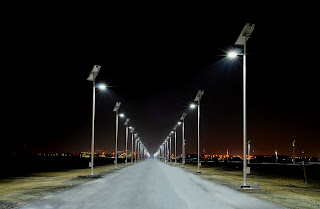 Developing Nations/Rural Communities Will Leapfrog. As with cell phones, the lamps allow communities and regions with minimal or no grids to leapfrog over the “grid-wired” stage of technological development. I’ve spoken with former Peace Corps workers in rural Mali who described the life style revolution ten years ago from no phones  to cell phones for almost everybody. Truly empowering. Will SolarOne and its direct competitors effect a similar sea change in lighting? Prepare for transformed nightscapes and accompanying changes in life style—from predominant darkness to illumination—in places like rural Africa. In many ways, it's a new-tech recapitulation of the Edisonian liberation  of nighttime over 100 years ago in the Western world. 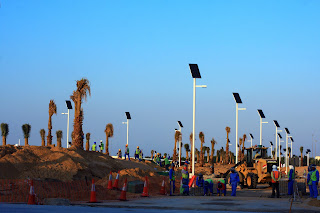 Light in the Desert.The company's lamps recently passed muster in Masdar City in Abu Dhabi of the United Arab Emirates. Masdar is touted as the world’s first zero-carbon footprint city. The SolarOne system won the day after a sandstorm followed by several cloudy days knocked out the rest of the solar-powered competition under evaluation. The company's self-contained street lamps kept on shining. 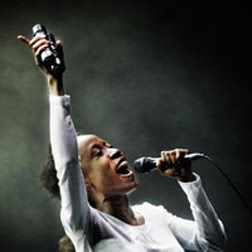 To these ears, Malian diva Rokia Traore’s April 14th concert at the University of Massachusetts Fine Arts Center defied expectations. With her deft ensemble arrangements, strategic incorporation of Western harmonies and scales, and acoustic-electric hybrids, she has created her own unique sound of—dare I say?—Malian chamber music (albeit with Western touches). No surprise with that: during her wonder years, she traveled often to France, Belgium, and Algeria with her diplomat father, assimilating international musical and cultural influences.

Her cds—the two most recent ones licensed on Nonesuch from Nick Gold’s British-based World Circuit label—have excelled with a relatively quiet intensity: their virtues include consummate textural and dynamic balance, endlessly inventive polyrhythmic explorations, and striking vocals. A decade ago Rokia slipped into the Iron Horse Music Hall in Northampton on a hot summer night with a predominantly acoustic band (including ngoni, balafon, talking drums, and two backup vocalists) that magically conveyed those assets.

So how was her April 14th visit different? Rokia showed up with an electric power band that knocked socks and other vestments off. Propelled by the preternatural driving bass of Christophe Minck, her amped-up band—which also included electric guitar, Western drum kit, ngoni, a female backup singer, and Rokia— remained faithful to the lion's share of  her long-standing musical objectives.

True,there was some loss of clarity in ensemble separation and definition, but the ends justified those costs. Rokia’s own vocal paintbrush—frequently morphing from coloristic washes to piquant rhythmic accents—was never in doubt. Mamah Diabate’s breathtaking compings on a plugged-in 4-string ngoni would have been the envy of Eric Clapton or Buddy Guy. And the collective propulsion and polyrythmic inventiveness among Malian and Western musicians kept most of us on the edge of our seats. With those musical forces and Rokia’s musical leadership, there was
never any doubt—loud was beautiful! 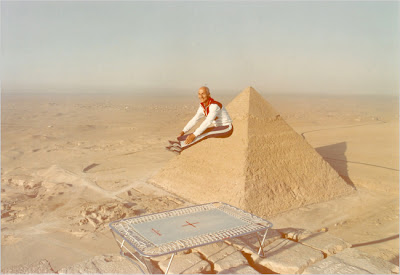 And I thought that the trampoline was always with us. Apparently like Duct Tape and WD-40, it was invented. Today’s NY Times obit offers a rousing tribute to its inventor and chief proselytizer—George Nissen—who I hope now saltates in a better place. Was Mr. Nissen a gymnast-entrepreneur or an entrepreneur-gymnast? Without question, the synthesis of nylon was an enabling factor (superseding canvas) in the trampoline’s market ascent. Mr. Nissen, the obit reveals, coined and copywrited “trampoline” from el trampoline, Spanish for diving board.
Posted by Wig & Pen at 11:39 AM No comments: Links to this post

The Daily Hampshire Gazette notes three households with two lawn signs in Hadley, Massachusetts, each supporting opposing candidates in the forthcoming April 13 election for school committee. In the photo above, Joyce Chunglo supports incumbent Thomas Waskiewicz, while her husband, Daniel, favors challenger Molly Keegan. Of her husband, Chunglo, who is chairwoman of the town’s Board of Selectmen, remarks: “He likes to stir my pot. He isn’t involved in town politics and believes what he reads in the paper.”

Try this at your next party: Ask spouses present how they might deal with their own lawn signage conflicts. My own decision would have been to display pink flamingos. But don’t trust me on marriage counseling. It didn’t work for me. Perhaps that’s an underlying motive for this posting.
Posted by Wig & Pen at 3:24 PM No comments: Links to this post 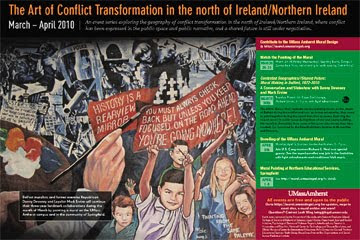 Northern Ireland has a long cultural tradition of expressing sociopolitical messages through murals. Two muralists from Belfast, Danny Devanny and Mark Ervine, once practiced their craft separately on opposite sides of Northern Ireland's sociopolitical divide. Today, they frequently collaborate on murals that emphasize cultural unity and respect for diversity in Northern Ireland and elsewhere. This week they are lecturing and collaborating on a mural at the University of Massachusetts in Amherst. They’ve also had an impact on business students at the university’s Isenberg School of Management. Read more.
Posted by Wig & Pen at 4:26 PM No comments: Links to this post