This Is Not a Peccary? 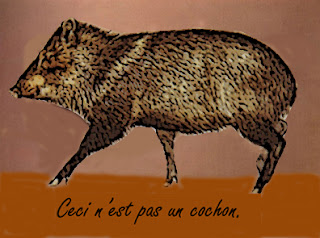 This is not a pig!!--Such a comfort for the zoo-going  public at the peccary corral at the Biblical Zoo in Jerusalem. To cover most bases, the signage is in Hebrew, Yiddish, English, and Arabic. And it terminates with two exclamation marks to underscore its urgency and transcendent import. (See the photo below; the sign, of course, reads right to left.)

﻿ After all, “the other white meat” and the animal that gives it up are anathema to Orthodox Jews and Muslims. According to Leviticus, the pig has the desirable “cloven” hoof but doesn’t ruminate (i.e., chew its cud). To be zoo- and dinner-worthy, you need both assets.

the pig, for though it divides the hoof, it does not chew cud, it is unclean to you. You shall not eat of their flesh nor touch their carcasses; they are unclean to you.

And the Qur’an's unambiguous position on pig consumption boils down to this: Just Say No! (or else!)

Enter the Peccary. But the peccary is a pigoid above the fray. So what if it they are known commonly as skunk pigs? So what if they are as hairy as Sean Connery’s back before Hollywood insisted that the original 007’s dorsal required a blade more persuasive than Odd Job’s? So what if they are members of the family Tayassuidae, a.k.a, New World Pigs, which belong to the artiodactyl suborder Suina, which also includes the bona fide pig family, Suidae.

Not to worry! In addition to cloven hooves, peccaries are blessed with the missing link to orthodox cred: a nonruminating stomach. (even though the organ has three chambers and an internal cuissinart that allows them to process roughage like prickly pear cacti.) 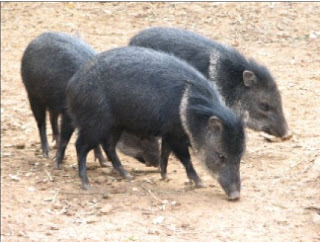 Peccaries for Peace. With that said, isn’t it time to elevate the peccary as a symbol of rapprochement in the Middle East? You’ve got a better idea? Let’s begin with our mutual tolerance for the little critters and erect a peace that lasts. Let's bring Arab and Jew to the peace table--a capacious table where all eat peccary together.


There comes a time in many a follicle-challenged pop-star’s career when the decision to conceal hair loss looms large. After all, for many of those ageing baldies, the seductions of marketing still pander to their roots in a culture where youth’s magic horn plays on. Check out, then, the Maginot Line in the career of James Taylor—a boundary where the hatless vagaries of youth give way to concealment by haberdashery and other wiles. Note the career tipping point below between his Dad Love’s His Work (1981) and That’s Why I’m Here (1985) albums. For Paul Simon, concealment came much earlier in the 1970s. Paul opted for hairpieces, which he finally traded in for hats in the mid-1990s.

On album covers, both artists have sported a frolic of hats. And both have embraced additional concealments like cropping their heads/faces right where hairlines might have launched in younger days.

Finally, they’ve also dispensed entirely with their own images on album covers (including Simon’s latest). Is Paul Simon’s Rhythm of the Saints a subliminal longing for plumage lost? Is JT’s Never Die Young a lusting for hair beyond the pale of his and our species?

It troubles Wig & Pen that both ageing boomers--true American artists--continue to duck and cover.  Can they reconcile their roles as tragic artists with membership by default in what Larry David celebrates as "the bald community."  Here's hoping they reconcile and let their 21st Century freak flags fly.
Posted by Wig & Pen at 11:11 PM 1 comment: Links to this post

In the clip below, Chris Hitler, an investment and real estate specialist in Mequon, Wisconsin, wants you to know that he is passionate about personal storage. Listen to the clip, and you’ll hear Chris, without pretentiousness or guile, deliver his pitch. For Wig & Pen, the experience was revelatory—everything about Mr. Hitler exudes middle American normalcy except, of course, the drop-dead weight of his surname. Comics pursuing straight-man roles should study this offering. It could raise the late Phil Hartmann from the other side.

This blog discovered Chris Hitler in the indispensible web article, A Brief History of Hitlers in America, by Howard Altman. Altman describes the town of Circleville, Ohio as Hitler Central. You can find five generations of Hitlers buried in its Hitler-Ludwig Cemetery. For marmoreal photos, click here.


The End of the Line? Altman’s article is a great read but like many writers who embrace a subject, he is excessively bullish about it:


You might think there wouldn’t be any Hitlers in America. But they’re everywhere, Altman remarks. ". . . In fact, there are 50 or so Hitlers living in these 50 states and their history with our country goes back over 200 years.

Fifty Hitlers is what I call a one-way trip to extinctionville. Let’s be generous and say that 40 have child-bearing potential. Twenty of the 40 would likely be women, who I think would be itching to trade in their surname for a spouse’s. That would likely apply to the trend in hyphenated married names, including those of the implicated offspring. What self-respecting American bride would prefer the married name of Hitler-Messerschmidt to the less controversial, more efficient Messerschmitt?

That leaves us with 20 male Hitlers. Even given a reproductively fit cadre from this subset, how many women do you think would line up to be the first on their block to conspire in Hitler, The Next Generation?

Inspiration for this post came from the pathbreaking TV series Hill Street Blues. In several episodes of season three, a traffic scofflaw—profession: unemployed stand-up comedian—sported the name Vic Hitler. Valuing true talent, Hill Street Detective J.D. LaRue signed on as his short-lived agent. But the jokester was doubly cursed: his name proved a liability with club owners and his on-stage narcolepsy proved a show stopper. Sample this Hitler’s day in court in the clips below.

﻿﻿For a second year running, this blog celebrates the enchanted craft of branding. What a growth industry it has become! Just like power tools, ping pong balls, universities, and New Age retreats, individuals have their own brands too. Such hopes had I for the improvement of my own personal brand 14 years ago after discovering Tom Peters’ heady article, The Brand Called You !

But even though I’ve repeatedly failed to realize my brand potential, it’s a comfort to know that future opportunities for revisionism await, if not in life, then afterwards via my local newspaper’s obituary column.

For several years, the Northampton, Massachusetts-based Daily Hampshire Gazette has turned to reader-penned necros.  Beside the honoree’s name and age, the author gets to distill a lifetime’s "footprint" in a word or two. Without purgatorial delay, here’s my Top Ten Roster from the past year. I’ve changed the names and ages of the innocent (and the experienced), but left their personal "brands" intact.:

2. Sidney Charles, 38, ~Saw Humor in Everything 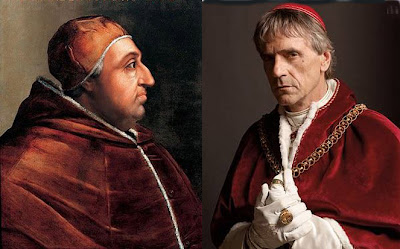 The Borgias, which debuted last night on Showtime with the no-holds-barred episode, “The Poisoned Chalice/The Assassin,” stars Jeremy Irons as Rodrigo Borgia, a.k.a. Pope Alexander VI. Without question Alexander could really fill a vestment (See above.) Jeremy Irons, on the other hand (like the late George Harrison), has—to euphemize—gaunt good looks. Who would spite him for not bulking up like Robert De Niro in the final segments of Raging Bull?

Irons, of course, is so convincing a thespian that he should easily overcome the slings and arrows of horizontal challenge. Especially since Showtime has gone out of its way to omit likenesses of the real Rodrigo from its marketing (i.e., we are not anchored to his true image). To underscore Irons’ dramaturgical gifts, this blog dares to present the original Rodrigo and his Showtime scion side by side. The Borgias’ dramatic grist, of course, should also help Pope Jeremy to rise to the occasion. After all, combining Church corruption and “Family” business (a la the Sopranos) should prove an unbeatable, transcendent opportunity. 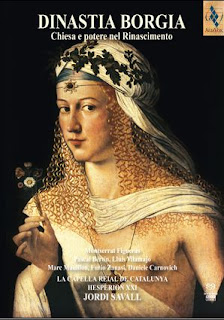