For this reviewer and hundreds of concert goers, the Punch Brothers’ stellar February 15 performance at the Calvin Theatre in Northampton was just what the music gods ordered. Just as significant, the strong turnout offered evidence that the Brothers are catching on with bigger, broader audiences.


For the band--a confederation of music boundary-spanners who challenge listeners with eclectic compositions and improvisations—that’s sparkling good news. Not that the Brothers invariably turn tradition on its head. (They did, in fact, perform a handful of traditional tunes with impeccable respect.)  But by and large, tradition and roots for the Punch Brothers are points of departure—a key resource for explorations across genres that can take unexpected (sometimes high-stakes) twists and turns. When the train leaves the station, American roots might morph on a dime into indie pop, which in turn may reconfigure, say, into disciplined yet freewheeling excursions with the plasticity of chamber music by Bartok and late Ravel.
Such disciplined freedom gooses up risk-taking by the band’s virtuosic front line players—Chris Thile (mandolin), Gabe Witcher (violin), and Noam Pikelny (banjo)--all three who can navigate any musical byway or conversation. And all five “brothers” (Chris Eldridge on guitar and Paul Kowert on bass complete the set) make a convincing case for telepathy via music.

Punch/Counterpunch. Still, there’s a coalition of listeners who don’t get the Punch Brothers. Not only the roots music police, but indie pop listeners who can’t stand classical and roots, and classical fans who throw up ramparts against trespassers into their magic kingdom. Then there are those who bridle at dissonance, even though the Punch Brothers always maintain a tonal center. (They do use dissonance strategically, for added spice and surprise.)  And still others get thrown by the frequently break-neck morphings of their compositions and improvisations.

For many, though, the above misgivings are precisely what make the music stimulating—they spike the punch. Indeed, they mobilize the neuroplasticity of the listener's brain on music, creating novel neural connections that that keep on giving. 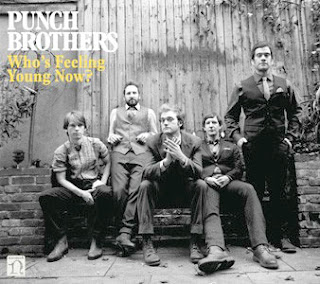 The conservative coalition aside, I'm surprised that Who’s Feeling Young Now? –the Punch Brothers’ splendid 3rd full-length cd, released in early 2012—wasn’t on more top-ten roots album lists for 2012.  It certainly was on mine. If the Northampton audience had its say, you can bet it would have been on theirs.
Apotheosis Now.  It did, though, in January/February 2013, make the 2012 ten-best list in Songlines, arguably the planet’s premier world music magazine. “String groups don’t get much more exciting or dynamic than this,” wrote Jo Frost, who  with Songlines editor Simon Broughton, made the final picks—most of which were drawn from the ten “Top of the World” selections that appeared in each issue during the previous year. Oddly, when I backtracked to find the original review, it wasn't on any of the monthly Top of the World lists, all whose albums had received five- or and four-star ratings. So, I uprooted the original review in the April/May issue, which gave the album a middling three stars:

All that genre-busting and tricksy instrumental paradiddling might be hugely impressive, but at the end of the day, the Punch Brothers are at their most affecting when at their least adventurous,

Happily, more adventurous heads and justice prevailed. Progress in music and the joys of neuroplasticity won the day. I'll take odds that Songlines and the Northampton audience are still feeling young now.


Fellow Travelers: The Warsaw Village Band. Like the Punch Brothers, they deconstruct their own roots in the service of cross-genre exploration.  A tour of their latest album, Nord.
Posted by Wig & Pen at 5:29 PM No comments: Links to this post 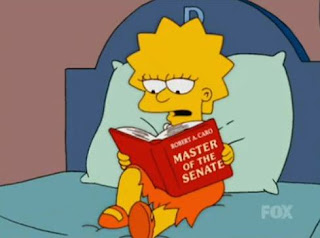 The first book to find its way onto my new Kindle was Robert Caro’s Master of the Senate—the third and (so far) longest volume in his unfinished quintet, The Years of Lyndon Johnson. Several years ago, I had gotten through 250 pages of the hard-cover version but found myself—an inveterate reader in coffee shops-- nudged toward physically lighter books. With Caro’s energetic, compelling prose, Master of the Senate was hard to put down. But at 1,200 pages and 3.2 pounds, it was even harder to pick up and schlepp to my caffeinated hangouts. I did seal the deal, but it was the Kindle that broke the filibuster. (No disrespect to Caro, who composes the pre-cyber way--long hand and by typewriter.)

Orthopedic Validation.  Two weeks ago in one of those coffee shops, a friend—a public radio personality--confessed: “Lou, I may have rotator cuff issues from reading Caro in bed.”  He had hyperextended his shoulder while hoisting the Caro from his night table. Whether or not Tommy John surgery is in his future, my friend’s experience can serve as a beacon to all who underestimate the power of supersized books to inflict orthopedic challenges.
The Caro Benchmark of Discomfort.  So here is a repurposed role for the hardcover Master of the Senate. Consider it a standard measure of readers’ physical discomfort. That is to say: 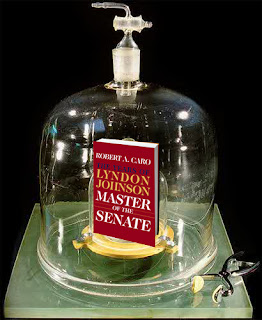 One Caro=one hard-cover Master of the Senate
The Caro might bow in as a normalized composite measure comprising weight, number of pages, and surface area. Jiggering the details is beyond this blogger, but it’s no mystery that a proper Caro scale would assign The Complete Miss Marple (4,032 pages) to the right and Strunk & White to the far left. And if someone recommended a good read at ¾ of a Caro, I’d reach for my Kindle. 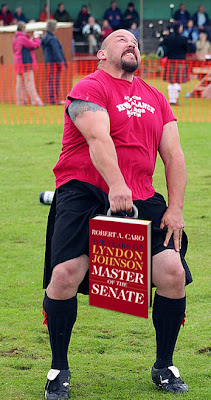 On Nazi Efficiency, Due Diligence, Branding 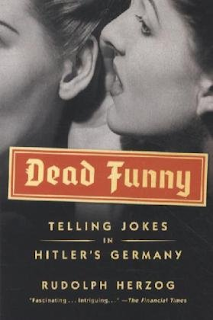 Leave it to those meticulous National Socialists.  In 1944 they not only executed an errant priest for joking against the state (i.e., for high treason & sedition), but sent an itemized bill for their handiwork to his family.  The tragedy of Father Joseph Müller and the itemized bill below are from Rudolph Herzog’s Dead Funny: Telling Jokes in Hitler’s Germany, a chilling survey covering the dark waterfront of post-Weimar humor.  Father Müller exited via the guillotine, a three-minute procedure—certainly more efficient than established alternatives inside  Germany—hanging or the firing squad. Hats (and more) off to the Nazis for their nod to French savoir faire. And in the spirit of Teutonic due diligence—the  bill below includes two itemized postal charges—one presumably for the 24 pfenning stamp on its envelope.

Did He Who Made the Lamb Make Thee?  On an increasingly branded planet, the swastika is goose steps ahead of the crowd as a symbol of evil. With that said, many Westerners have gotten used to its presence (and origins) in Hindu and Buddhist iconography. But as the photo below reminds us, there was a time, before the symbol’s Teutonic hijacking, when it had zero negative valence in the West. The 1918 photo of tricker-treaters below is from the excellent blog, TYWKIWDBI. The photo is disturbing. Credit its insouciance of pre-Nazi innocence, amplified by the children, and combined with the ultimate brand of sinister experience.
﻿