One of the odder hypotheses in Mindless Eating—Brian Wansink's book on the behavioral traps that lead to unwise eating habits—involves those orange jump suits worn by prisoners. Wansink contends that weight gain associated with extended prison stays may have as much to do with prison wear as with the usual suspects—lack of exercise and starchy prison diets. That’s because loose fitting orange fatigues take away the girtho-static advantages of the pants and belts that automatically let us know when we’re bulking up.

It would be criminal, though, to limit that line of inquiry to the prison population. Might it not, for example, prove a cautionary boon  for wearers of North African and Middlle Eastern garb like jelabas, hijabs, jilbabs, and ultimately, the full burqa? What a timely topic for cross-cultural empirical research.

More on the burqa. “The burqa is not welcome on French soil,” France’s president Nicolas Sarkozy has emphasized. President Sarkozy considers the burqa anathema to an open, democratic society—especially to its women. [although banning it would be indisputably undemocratic].

But aesthetics might also be a factor. What an affront the burqa must be to a society whose self-identity is enmeshed in high fashion and visual refinement? Is any nation more obsessed than La Belle France with the full disclosure of physical beauty--especially of its women? Sarkozy certainly hit the jackpot himself with his own significant other (even though she is imported).

The power to conceal. The burqa, moreover, has the capacity to conceal much, much more--Not only who resides within but what accessories may be lurking. I first learned about sleight of hand from my maternal grandmother, a substantial  woman who frequently produced tissues, a powder compact, and legal tender from her sleeves and occasionally her bodice. Endowed with  a burqa, Nanna  might have added  her alligator wallet, a deeper line of  cosmetics, perhaps even my uncle’s service revolver.

Mr. Sarkozy, take notice: Democracy can be a bitch and the open society will always have its enemies. You, in fact, may ultimately be one of them.
Posted by Wig & Pen at 3:27 PM No comments: Links to this post 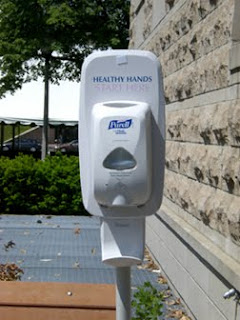 Two weeks before this year’s graduation ceremonies at my university, parking-meter-shaped Purell dispensers like the one above began popping up on campus. They are artifacts from last year’s H1N1 preventive campaign that have earned a future in my university’s public heath initiatives. Graduating students at commencement ceremonies would do well to take them and hand sanitization more seriously.

When they cross the stage to receive their diplomas, graduates shake the hand of one dean (or chancellor, or provost). But the hand that they’re shaking is an uber-hand—a node in a network, if you will—that has just pressed the flesh with scores, perhaps hundreds, of less than deanly extremities.

That’s something that deans know intimately, so when they finally sit down, most of them worth their advanced degrees reach for the sanitizer.That clear realization among deans is what I call The Dean’s Advantage. But most graduates who have just pressed the flesh with one dean think in terms of one hand—not the many hands that have just been up close and personal with the One.

That’s why they should get sanitized right away. Incidentally, don’t expect the dean to sanitize periodically during the handshaking queue. The scale and time constraints of the ceremony will always favor a linear assembly line, not lean production where the dean might halt the flow.

But there may still be a way out of this: consider the “GE Handshake” in the video below.

Tails of an Office/Desk Distribution 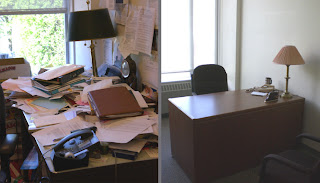 Among the more than 100 faculty offices at my school on the UMass Amherst campus, the two depicted above may well be the end points on my building’s Oscar Madison-Felix Unger continuum. The professor sporting the Oscar desk (above left) typically takes care of business without much trouble as long as the work at hand stays in his active working space—i.e., on top of everything else. But today’s active workspace can soon become tomorrow’s substratum. To deal with that, the professor periodically has a student assistant or two—in accounting, not archeology or historical geology—wade through the strata and sort the material by subject for assignment to boxes.

His Ungerian counterpart and owner of the desk on the right has no such challenges, requires no such help. And I will forever be in his debt for having nudged me to spiff up my moustache, which to my surprise had been a tad longer on the left than on the right.
Posted by Wig & Pen at 9:59 PM No comments: Links to this post