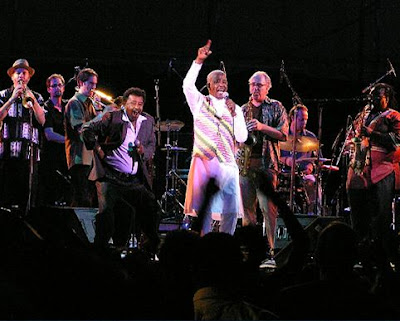 “I know trance music when I hear it,” might have been the response of late U.S. Supreme Justice Potter Stewart had he attended last Friday night’s (March 25) concert as the final installment in this year’s Parallels Series, an inspired new music series at Amherst College. For a nonstop hour and 45 minutes, Ethiopia’s greatest singer, Mahmoud Ahmed, backed by Boston’s Either/Orchestra—a progressive ten-piece jazz ensemble—had the audience of 400+ under its power.

What was it about that dark, eclectic music that provoked college-age women to rise up from their seats, shaking and swaying in serpentine thralldom? Or the rest of us to embrace a more seat-bound version of such submission?

Seduced by the darkness. The relentless pulse gained power via the dark confines of the music’s architecture. A pentatonic scale that almost never resolved on “comfort” notes like major fifths, and a tonal range that rarely exceeded two octaves kept the listener in a state of willing confinement. So did horn tones that avoided primary colors and excessive brightness.

The effect was to propel the audience forward in a truncated musical space--as if through a dim-lit subterranean passageway just high enough to stand in. Along the way, periodic syncopations from Mahmoud’s baritone and the horns added spice to the relentless forward progress. The musicians offered additional digressions--call and response vocal and instrumental volleys and extended instrumental improvisations (some of them excellent).

During one of the concert’s many sultry moments, it occurred to me how splendidly the music might work as a soundtrack in some of David Lynch’s tawdrier movies—perhaps even in Twin Peaks. Swaying in my seat, I closed my eyes and all at once saw a giant likeness of Grace Zabriskie’s face homing in on my own. A true demonstration of the power of music to enchant!

Mahmoud Ahmed’s basaltic voice originates in the back of his throat and takes you for a ride. At age 69 he remains a vocal marvel; his commanding presence got stronger as the evening progressed. Listen to a clip of him below with the Either/Orchestra,which--just like in in Amherst--offers a stunning exploration of crepuscular soundscapes through nuanced arrangements and dark dissonances.

A Chip off the Old Corporate Block 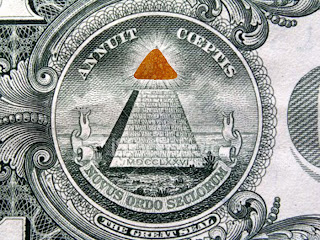 The next time you reach for a Dorito, consider its rounded corners. Those beveled vertices are soft, but it wasn’t always that way. Before the great Dorito makeover of 1994, they came to sharp points, just like at your friendly Mexican restaurant. In the company of a good sangria, who hasn’t felt the prick?

I first became aware of Doritos’ rounded corners ten years ago on a tour at a Frito-Lay factory. When we got to the Dorito production line, our host showed us the metal molds, each with a myriad of soft-cornered triangular negative spaces awaiting infusions of cornmeal. No sharp points; fewer law suits to worry about, he confessed.

That explanation, of course, was never part of the official Pepsi/Frito-Lay party line back in 1994. (Nor will you find it in Dorito’s present-day Wikipedia entry.) It’s easier to eat them without the sharp corners, noted Jerry Vogel, Frito-Lay’s then Director of Corn Products in a 1994 New York Times article. . . a lot of the scrap in the bag, he added, was from the corners breaking off.

No doubt about that, but back then high-profile lawsuits against food manufacturers/purveyors and, of course, the tobacco industry, were all the rage and the source of deep-dish corporate neuroses. Remember the great McDonald’s scalding coffee incident of 1992? Seinfeld did, in an episode when Kramer bungled a sure-thing settlement in the wake of a scalding latte tucked inside his pants. Who told you to put the balm on? demanded his motor-mouth attorney, Jackie Chiles. In a later episode, Jackie experienced similar frustration when Kramer kissed off a windfall from the tobacco companies. But by redesigning the Dorito for architectural superiority, Frito-Lay made its chip litigiously bullet proof. And brace yourself--they did consumers a favor. 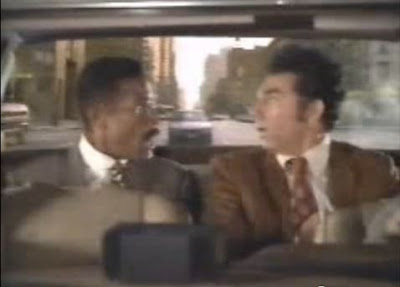 New Glocks on the Block in Amherst, Massachusetts 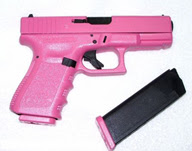 Last week, when my son’s alarm failed to detonate for school, trouble ensued. So I promised that we’d buy a new clock at our local oasis for controlled substances, CVS. Perhaps because of the aura of drugs, we began riffing compulsively—a la Who’s on First—about buying not a clock but a Glock—e.g., a high-performance Glock with a quiet mechanism, etc. Of course, it was easy pickings to home in on several stylish Glock-branded Clocks via Google. 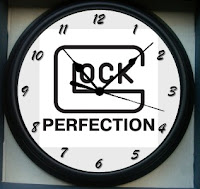 A Glock in a Clock; that sounds like Dr. Seuss material, observed a friend who has never fired a gun. That immediately evoked fond memories of The Cat in the Hat, featuring its superhero’s precarious balancing acts with concatenations of household objects (see below) This high-profile blog would never alter such copyrighted material, but invites you—consider it a rainy-day family project—to photoshop the requisite alarm clock and Glock to the top of the heap.

Finally, while flat out on my New Age chiropractor’s training table last week, I mentioned my recent blog post on forthcoming legislation in Texas that will allow concealed guns onto the Lone Star State’s public university campuses. My chiropractor’s response: You should have seen the Valentine’s Day ad that I saw for a pink derringer-size Glock surrounded by chocolates—all in a heart-shaped box. So far, this blogger’s searches for that keepsake have come up empty. But Wig & Pen is pleased to submit the forensic evidence below, no less felonious to the diabetically challenged.

﻿
﻿When I was five, my family lived next door to an affable guy who owned a fish market on Water Street, the old Jewish commercial center in Worcester, Massachusetts. His wife was a bleached blonde and a chronic malcontent--often with him in the crosshairs. “Nathan—don’t come near me until you’ve showered,” was her ritual greeting to him after a fishy day’s work. He was a good provider; but she had higher aspirations, my father told me years later. And, added my father, she subscribed to one olfactory truth--that you could take Nathan out of the fish market but you’ll never take the fish market out of Nathan. How did he de-scent? A shower must have just been the beginning, my father speculated.

Those buried memories rose to the surface last week when I saw the artful cuts of salmonized graphics (see above) accompanying the Wall Street Journal’s March 2 feature, The Slippery Business of Picking Fish. What a paean to the salmon!—graphics that suggested salmon wall-plaques, salmon contra-dance skirts and the kindest cut of all—a salmonic likeness of the Green Mountain State. (So what if it’s Wild Pacific Salmon?) 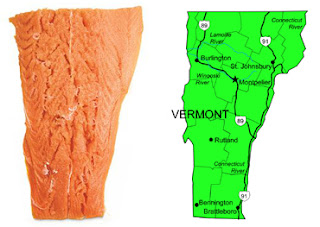 The Mostest in Symbiosis. Salmon and Vermont, in fact, have coevolved in landlocked harmony even before Wig & Pen. Vermont salmon (Salmo salar) are genetically and physically identical to their Atlantic brethren—both are balletic leapers, spawn in streams, and migrate to open waters—the latter to the ocean and the former to Vermont’s lakes (Champlain, Dunmore, the Northern Lakes of the “Northeast Kingdom).  Click here for more than you want to know about Vermont’s landlocked salmon.

And how might a veteran fish monger best exorcise the smell of Vermont salmon or, for that matter, an entire fish market? There’s no silver bullet, remarked the proprietor of North Shore Seafood on King Street in Northampton, Massachusetts. “Throughout the day I use hand soap and lemon juice,” he confessed. “Of course I shower when I get home and use a bit of bleach on my clothes. One thing’s for sure: if I go out at night, it's not in clothes that I’ve worn at work--I do value what's left of my social life.”

Guns in Texas College Classrooms: A Shot in the Arm for Online Education?

﻿﻿﻿﻿﻿﻿﻿﻿﻿﻿﻿﻿﻿﻿﻿﻿﻿﻿﻿﻿Blogger’s preface: Two years ago, my friend Osgood,* a dynamic professor of accounting, left my campus in Amherst to head up an accounting department at a large private university in Texas. Lately, I’ve been thinking about him in light of forthcoming legislation in the Lone Star State that will give college students and their professors the right to pack heat—including concealed handguns—on the state’s 38 public university and college campuses. Although the law targets public higher education, my friend’s campus and other private universities will no doubt be in the crosshairs of change in the “Don’t Mess With” state—change that aspires to make gun possession a protective right for (almost) all.

That’s especially poignant for my friend because introductory accounting regularly ranks high among courses that fail the most students. Credit two factors: the course’s level of difficulty and its status as a gateway for majors outside accounting. If you plan, for example, to get a business degree in marketing or human resources, soldiering on through intro accounting is a rite of passage. (After all, it is the language of business; isn't it? ! Ask your CPA. See the top ten list below for Temple University.) Passing intro accounting, then, is analogous to, but less formidable than, passing organic chemistry if, say, you plan to become an orthodontist or a proctologist.
﻿﻿﻿
﻿﻿﻿ Gird Thy Loins. The bottom line, then, for my friend and his intro accounting staff is—Protect yourself at all times from students who may harbor resentment and,of course, guns. If you’re on the dais in a lecture hall, you’re the alpha target in the house. If 20% of the 200 students in your class are failing, and just 25% of them (i.e., ten) are armed and dispersed among the audience, their own accounting problem becomes your logistical problem. First, Wig & Pen recommends that you seek intimacy with Kevlar. Like the professor depicted above, wear a suit that declares—“I'm a bipedal fortress.” Avoid nambi pambi Kevlar executive vests: Don’t conceal your protective cred like a hidden asset in an accounting footnote. (Explore the latest in protective wear here.) 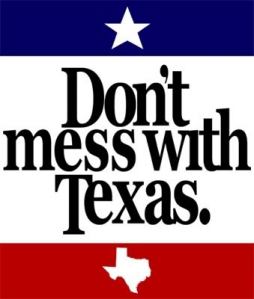 Second, value good marksmanship when hiring teaching assistants. Remember, they are your first, best line of defense. Position them tactically and if possible, assign failing students to a pie-wedge-shaped sector that widens toward the front of the hall. Just imagine, the hapless, ill-intentioned student in the second row doing a depreciation problem. Before he can say “straight line,” he’s fit for amortization himself, felled by friendly fire.

And finally, if like Wig & Pen you’ve never fired a gun beyond Boy Scout camp, consider this strategic prospect: Online education is becoming as expansive as all of Texas!


*I’ve changed his name to protect what’s left of our friendship.
Posted by Wig & Pen at 3:09 PM 4 comments: