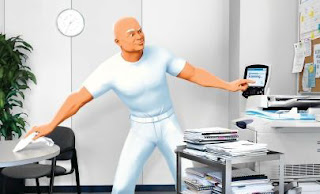 A true Eureka moment—the realization that the hunk making copies in the ad above was none other than the venerable Mr. Clean. That image, which appeared three weeks ago on the front page of NYTimes.com, was from a two-year-old ad campaign by Xerox, which  boasts that it “helps iconic brands [notably Mr. Clean and Bulls Eye the Target dog] with business processes and document management, freeing them to focus on what matters most – their real business.”
If you’re a literalist, that would free up Mr. Clean to follow his bliss, i.e., getting rid of dirt, and grease, and grime (in just a minute). Why, though, is Mr. Clean making copies in the first place? Initially, I thought, he’s expanding his skill set (and marketability) in a grudging economy where unemployment continues to hover above  8%.  But unlike Mr. Clean’s basic mop-and-wipe métier, which seems pretty much bullet-proof to outsourcing and automation, making copies has become increasingly automated with more than its share of downsizing, especially on the feed-and-copy, noncreative end. 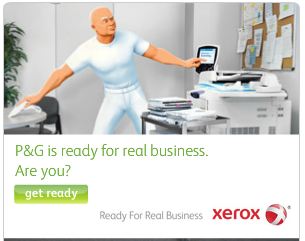 But note the passage below and the dust rag in his  right hand: He’s pumping up Procter & Gamble’s bottom line through judicious multitasking [not every cat's pajamas]. Xerox explains:


The campaign takes brand characters out of their expected roles and shows them doing business processes such as invoicing or digitizing documents with exaggerated results. The campaign demonstrates there are better ways for companies to handle back office work – by innovating and partnering with Xerox.

But weep not for Mr. Clean.  Demand for his next-to-godliness skills are unassailable--not to mention his distinction as a pitch man who transcends  generations and the business cycle.